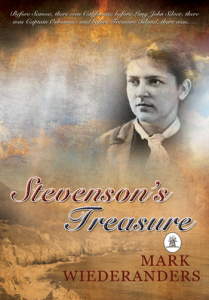 Fanny Osbourne had not expected to fall in love with a penniless writer in bad health who was closer to her daughter’s age than to her own. When they first met, his strangeness had put her off. What sort of man would go by his middle name – and insist that it be mispronounced? Now, two years later, she followed Robert Louis Stevenson down a twisting path beneath beech trees, aching to stay with him. In her dreams, every afternoon would be like this one, with filtered sun warming her shoulders as they strolled deep into forests, talked, sipped wine and made love.

Louis had immediately stood out from the other men at the camp, who scurried around with easels and claimed they were Bohemian, but excepting their berets and paint-spattered smocks were as ordinary as hitching posts. Louis – now with arms waving within his wreck of a blue velvet coat as he gushed about the canoeing trip they would take in the morning, and how they must stop in the village to buy a baguette and burgundy – had been honestly strange, madly funny, dying but self-denying, passionate, sensual, devoted, all that she wanted, except to keep her children. She longed to reach her arms around him, quiet his chatter with soft words, and convince him of the reality of her situation.

Unfortunately, accepting the reality of any situation did not seem to be Louis’s strong suit. Reaching a pond choked with yellow and white water lilies, she set her foot against the root of a weeping willow tree. “Louis!”

He turned to her. “Is something wrong?”

“This spot is as good as any.”

He set up her easel and placed the stool on a firm patch of dirt. “Give me a minute to compose myself.” He sat on a low branch of the tree, pushed his ridiculous Indian smoking-cap back on his forehead and folded his arms in what he, no doubt, considered a rakish pose.

She would sketch him first, and then tell him. Greedy, to capture him on a page that she would pack with her things and take out, later, to secretly savor when she was back in California with her husband. But it was all she would have of him, so she felt desperate to create something of beauty. Or if not beauty, she would at least render him with the competence gained in two years of study with some of the finest artists in the world, purchased at enormous cost, her husband’s dollars being the least of it.

Feeling a bead of perspiration crawl down her neck, she loosened the chinstrap of her sun bonnet. What a ridiculous sight the two of them must be: she, barely five feet tall, dressed from bonnet to shoes in black, her flowing skirts failing to conceal her natural, hourglass figure; he, tall and too thin, wearing yellow linen trousers, big-knotted red tie, blue velvet coat, and an embroidered silk cap that flaunted every color of the rainbow.

First, his proportions. She formed a rectangle with her fingers and considered Louis through this frame, trying not to be distracted by the meadow behind him, where boulders jutted up like castles from the riot of flowers and the more muted tones of junipers and heather. His face was oblong, like a long stone hanging from an earring. Slight, trifling almost, but with unusual length from the eyebrows down to the chin. Long thin nose, and beneath it the wry grin that would be charming except the teeth were stained and a little bit crooked. She would draw him with lips closed. A gentle mouth, a boy’s, really, except for the thin mustache above it. The nose a classic shape, slender like the rest of him. And the eyes. Sensuous and, unlike her husband’s, utterly without guile.

“Are you certain that you are all right, Fanny? You look so sad.”

She swallowed. “Don’t talk, it distracts me.” She took up a pencil and quickly sketched his face and its features in rough proportion to what she observed. Then she worked on the rest of him. The big coat with its wide lapels that dwarfed his shoulders pleased her. She added shading to suggest bulk until satisfied that her drawing captured the way he looked like a boy who had put on his father’s coat. The humor provided by the coat might counterbalance the haunting strangeness of the thin face.

Now to the hands. He had propped one of them on a knee so that the fingers dangled downward. Long, lean and delicate, they were the fingers of a pianist or, perhaps, a masseur. Sinful fingers.

He smiled playfully. “I saw that look, Fanny Osbourne.”

“Just for an instant, the grim look you’ve had all day gave way to a naughty grin.”

“Nonsense.” She dug in her purse for a cigarette paper and tobacco.

Louis relaxed from his pose, and they each rolled a cigarette. Fanny realized that her hands were trembling, so she held them to her sides while Louis struck a match. She wondered if the children were busy packing for the long trip home as she had asked. Tell him now.

Louis blew smoke to the wind and smiled. “What are you thinking, Fanny?”

She swallowed. “I’m thinking we should finish the sketch.”

She continued in silence, fiercely concentrating on the details lest she burst into tears, first drawing the silly cap and adding scribbles for its embroidery. She drew, and re-drew, the eyes because she found them his most winning feature. Their soft stare managed to pierce her with their innocence. “Could you look elsewhere than at my eyes?”

“Then at least close your mouth over those teeth.”

He laughed. As always, the laughter brought on coughing but he soon quelled it. He composed himself, clamped his mouth shut but his lips quivered as if with the slightest provocation he would laugh again. Something in the pale, mock-solemn face provoked in her a deep longing and a profound sadness. She had an inkling of why, but suppressed the haunting thought, finding it obscene.

She gripped the edges of the easel with both hands, took a deep breath, and opened her mouth – but could not find the words.

She swallowed hard and looked down.

“You are going back to California,” he said flatly.

“I must,” was all she could manage.

His arms were open for her when she collapsed in heaving sobs, holding her, rocking her as if she were a child, a ridiculous idea, she being eleven years older than he. “You won’t be rid of me so easily,” he said.